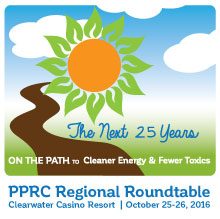 Day one of last week’s Regional Roundtable began with presentations on the real, destructive impacts of climate change. Presentations then moved toward solutions. How can businesses prevent fossil fuel pollution by making energy efficiency improvements and installing clean energy now, and in ways that will help, not hurt, their bottom lines?

Patricia Cochran, of the Alaska Native Science Commission, began the Roundtable with a shocking presentation about how climate change has affected native villages in Alaska. Alaskan coastal communities are literally on the “front lines” of climate change. They have experienced rapid temperature increases (on average over three degrees Celsius in the last 40 years), floods, storms, disappearing ice, changing flora and fauna, and more difficult and dangerous hunting conditions. A “harbinger for the rest of the world,” as Cochran said, these villages have also showed remarkable ability to adapt. Cochran suggested that our plans to adapt to a changing climate need to incorporate both traditional knowledge and science. Not all doom and gloom, she provided a number of non-profit, state, and international resources that do exactly this.

Bill Dewey, of Taylor Shellfish, gave an excellent overview of how ocean acidification is linked to climate change—both the result of too much carbon in the environment. A more acidic ocean harms the ability of shellfish to develop. Dewey described the drastic drop in oyster seeds that rocked the oyster industry in 2007 and 2008. The crisis prompted Taylor Shellfish to more effectively monitor ocean pH levels as well as to treat water in the seeding process. “We worked hard to get the carbonate chemistry right,” Dewey said. Dewey also described the unique state response to the crisis. State money and resources have helped the shellfish industry survive, and now thrive. Current programs, such as using kelp and seaweed beds to protect oysters and change local water chemistry, represent the cutting edge in an industry that remains central to the state’s coastal communities.

Paul Williams, Suquamish Shellfish Biologist, picked up where Dewey left off by describing the many problems of ocean acidification and the many benefits of restoration programs. Kelp beds, for example, both remove carbon from water and improve shellfish habitat. Williams also emphasized the importance of K-12 environmental education programs. Stronger education standards, Williams said, will help create an informed, optimistic, and capable youth movement that can tackle the deep-seeded problems of climate change and habitat destruction.

Switching gears, PlanLED’s Gary Chittim gave a wonderful summary of the non-visual effects of light. In short, “We ingest light,” said Chittim, “so maybe we should think about what we’re ingesting.” Not only do LED lights provide drastic improvements in energy efficiency, but they are showing increasingly quantifiable improvements in cognitive and non-cognitive function of athletes, students, and elderly persons. Chittim suggested that businesses of all kinds can use LEDs to improve their working environments.

Bret Turner, with Northwest Electric & Solar, gave an excellent pitch on why commercial industries should consider solar as a responsible and cost-effective solution to their energy needs. Commercial sites have a number of advantages over residential sites. For example, they offer more efficient panel orientation, more available space, less shading, and more control over where modules are placed. In other words, they allow businesses to maximize the efficiency of their panels. Turner also described the many federal, state, and local incentives that currently make commercial solar not only a viable option, but a cost-saving one. “We’re in a sweet spot right now,” Turner said. “The incentives are still there, and prices have come down substantially over the last few years.”

Ray Hawksley, with the Energy Trust of Oregon, described a specific energy efficiency opportunity that businesses may have not considered. Air pollution systems are often required by permits, and they use significant energy. By optimizing these systems, namely dust collection systems, businesses can receive an almost immediate payback. Hawksley provided a few case studies, incentivized by Energy Trust grants, which saved businesses significant amounts of energy and money as well as offering secondary benefits like a cleaner, safer, and healthier work environment. The Brentwood Corporation, for example, saved about 1.3 million kWh annually, and about $86,000.

Brittany Price, with NW Energy Efficiency Council (NEEC), showed how energy benchmarking practices and tools are improving the energy efficiency of hundreds of large buildings in Seattle that are part of the 2030 District project. Price also described a few of NEEC’s wonderful resources for commercial operations. NEEC offers a robust Building Operator Certification program, which trains building operators to manage many different building systems and technologies in safe and efficient ways. NEEC also offers a Tool Lending Library, which allows the public access to a variety of tools that can help them assess how systems are performing.

Finally, David Kunz (of the Oregon Department of Environmental Quality) and Michelle Gaither (of PPRC) reviewed many of the diverse ways that Northwest breweries are leading the sustainability charge. Kunz described how Portland brewery Hop Works is integrating green chemistry into its hazardous waste program. By linking its solid wastes and hazardous wastes the brewery has established a culture of waste minimization, a model for any larger business looking to do the same. Gaither described a number of innovations that breweries are using to reduce waste, water, energy, and CO2. For example, Widmer Brothers, in partnership with the Washington Department of Ecology, is currently piloting a Fog in Place sanitation system to test its ability to significantly reduce both water and chemical cleaning materials.

Comments Off on Summaries of Regional Roundtable Presentations, Day One