How Can We Make Synthetic Turf Fields Less Toxic?

* DISCLAIMER: PPRC does not endorse any specific products or manufacturers mentioned herein. 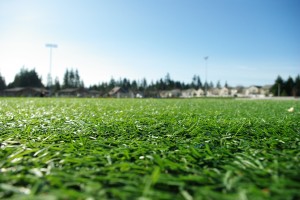 The installation of synthetic turf fields has skyrocketed in recent years. The Synthetic Turf council estimates that over 11,000 turf fields are currently in use in the U.S.. Though synthetic fields may offer some benefits over natural grass, a number of news features and studies have raised questions about the environmental and health impacts of synthetic turf. A few of these concerns are:

For those who have chosen, or are choosing, to install a synthetic turf field, what are some of the practices and products that can reduce the environmental health impacts of turf fields?

This Rapid Response will tackle a few issues specifically:

Much of the debate about the toxicity of turf fields has focused on the infill, or the small pellets of rubber first added to turf in the late 1990’s that provide bounce and cushion. Almost all fields installed in the U.S. use crumb rubber infill, made by grinding up old tires, or a silica sand/crumb rubber mix. As part of the positive side of the environmental ledger, turf fields offer a major outlet for recycling old tires. Rick Doyle, president of the Synthetic Turf Council, says the synthetic turf industry currently recycles 1/12 of the 300 million auto tires that are withdrawn from use each year.

On the negative side of the ledger, however, tire crumb rubber contains a mixture of all the chemicals found in tires. Four chemicals found in tire crumb rubber have been labeled carcinogens by the International Agency for Cancer Research (IARC). Carbon black, for example, typically makes up 20 – 40 percent of infill. Studies show that crumb rubber fields emit more volatile chemicals as temperatures increase. This is a concern because turf fields with black crumb rubber typically get much hotter – often 40 to 60 degrees hotter – than ambient temperatures. Tires also contain zinc, a regulated metal in stormwater, which can leach out of the rubber infill material.

The main industry group for synthetic turf, the Synthetic Turf Council, maintains that turf fields do not pose any health risks to athletes. In support of this stance, the organization posts a comprehensive list of independent exposure studies on its website.

Despite the above studies, a few news outlets have reported a suspicious grouping of cancer cases that raise serious questions about the safety of exposure to synthetic turf. Also, many of the authors of the above studies recognize major limitations in their abilities to establish the safety of modern synthetic turf fields. Limitations and variables include: the limited number of samples and sites, the diversity of tire crumb material, ambient outdoor temperatures, and field age. David R. Brown, a directing member of Environment and Human Health, Inc. (EHHI), says that the main barrier to assessing the safety of recycled tire rubber is the high variability in tire construction and the lack of chemical characterization of the crumb rubber. “Very few samples have been tested,” Brown says. “There is no study with sufficient sample sizes to determine the potential hazard.”

Exercising the precautionary principle, the New York City Department of Parks and the Los Angeles Unified School District have both decided to ban crumb rubber infill in the construction of any new artificial turf fields. For facilities wishing to follow this example, several organic infill materials are available in the North American market. Organic options, which are typically more expensive than crumb rubber, include sand, coated sand, and other fibers. Another option is to use less toxic plastics.

Two commercially available infill materials include Ecofill, produced by Mondo, and Geo Turf, produced by Limonata Sport. Mondo makes a polyolefin-based granule that, according to the company: disperses heat more efficiently; is highly shock absorbent; does not contain polyvinyl chloride, chlorine, plasticizers, heavy metals, or other harmful chemicals; and is 100% recyclable. Geo Turf is made from coconut husks and cork. This “corkonut” material can be reused in gardens, driveways, or other fields after the life cycle of the turf. Domenic Carapella, Managing Director of Limonta Sport USA, states: “We have had the entire system of turf, backing and organic infill tested and re-tested by independent, accredited labs to determine that our synthetic turf and organic infill system contains undetectable amounts of lead, and other heavy metals and volatiles; eliminating the threat of urban water run-off, contaminated soil and associated health concerns.” See the advertised environmental benefits here. Geo Turf is also endorsed by the National Green Energy Council.

Synthetic turf end-of-life costs, both economic and environmental, often get overlooked. But these costs can be significant and worth considering at the onset, especially as increasing numbers of turf fields are recycled in the coming years. According to the Synthetic Sport Council, by 2017 over 1,000 synthetic turf fields will be deconstructed annually.

Turf fields pose a recycling problem because they are typically composed of diverse materials. Conventional turf includes a variety of polymers such as polyethylene, polypropylene, nylon, styrene butadiene rubber and polyurethane. In order to be recycled, these materials need to be separated, a process that requires shipping turf to a processing facility. After the turf has been separated from the infill, it can be broken down into materials suitable for post-consumer plastics. The Synthetic Turf Council proposes the following ways that turf can be recycled:

However, the Synthetic Turf Council also suggests that the cost of shipping stands as one of the biggest barriers to recycling synthetic turf. Currently the vast majority of turf gets landfilled, another reason why facilities should consider using organic infills. Such infills can be recycled more easily or they can be used on-site for landscaping parks, driveways, and lawns without the threat of exposing the public or ecosystems to escaped toxins.

Synthetic turf can be reused in a number of ways, but re-using the entire 80,000 square feet of an average turf field may require some creative thinking. The Synthetic Turf Council proposes these reuse methods:

Turf paint is applied to the turf in different ways depending on the sport(s) played on the field. Often, a field is dedicated to one or a few sports. For instance, some community centers have fields that are marked for football, soccer, and baseball. In this case, the field is often marked with permanent turf paint to minimize repainting. On other fields, moreso collegiate and pro, removable paint is applied for different sports, and visiting and home team logos are often temporarily painted on the turf.

The removal process typically involves spraying a release agent on the area to be removed, followed by manual wiping or scrubbing, or use of an agitating/vacuum machine, followed by water rinsing.