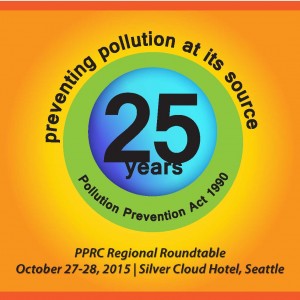 PPRC’s 24th Annual Regional Roundtable began with a reminder by Carolyn Gangmark of US EPA, Region 10. “We’re social animals, and meeting in person is crucial,” Gangmark said. “We’re smarter together.”

Northwest states then provided updates about their programs, a feature that’s always a popular one at the Regional Roundtable. These updates lay the foundation for more robust collaborative efforts moving forward.

For Alaska, Kurt Eilo outlined the suite of programs managed by the Alaska Forum, namely its Green Star Program, Apprenticeship Programs, and Environmental Training Courses. The Alaska Forum is also piloting a new Green Communities program, modeled after the standards of Green Star, to help improve the sustainability and health of small rural communities through education and empowerment.

Tom Boucher and Ken Zarker, both with the Washington Department of Ecology, mentioned the successes and challenges of engaging businesses in green initiatives. Both suggested that the state’s focus on solutions is paying off. “We’re not trying to ban and restrict,” Boucher said, “But rather help businesses make better decisions.” Zarker, the Advisory Council Chair for Northwest Green Chemistry, and the pollution prevention section coordinator for WA Ecology, named a number of tools that businesses can use to green their supply chains and processes. He also suggested that there may be opportunities to systematize the use of these tools within certain sectors or industries.

Pete Anderson, with Oregon DEQ, highlighted the effective laws that the state has passed that are improving the health of the state’s workers and children. Anderson mentioned the Safer Chemicals Law as well as the Toxics Free Kids Act as examples of how state laws are moving the national needle toward safer chemicals. 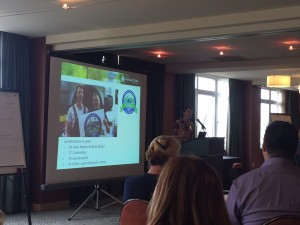 Grace Stainback with Portland State University’s College of Urban and Public Affairs shared a fabulous presentation on “Community Approaches to P2.” She shared the successes and challenges of her work helping EcoBiz, a PPRC program that certifies businesses for meeting sustainability standards, reach areas of Portland that have been historically ignored by sustainability campaigns that often target more privileged and affluent communities. Stainback offered a number of approaches to successfully engage and partner with communities that may be hesitant to participate in a sustainability program. Stainback emphasized three successful engagement tactics: build trusting relationships; focus on cost; and talk about the benefits of health to workers and communities.

Tom Boucher, of the Washington Department of Ecology, provided an update on a survey (“Toxic Chemicals and Safer Alternatives – A Survey of Business Needs and Interests, 2015”) that Ecology recently administered to businesses throughout the state. Including responses from hundreds of businesses of different sizes and sectors, the survey served to affirm the state’s increasing focus on helping businesses use safer chemicals. The survey suggested that, “94 percent of businesses were likely to work on using safer alternatives now or in the foreseeable future.” The survey also provided some suggestions about how businesses preferred to receive technical assistance. Ninety one percent of respondents said that the most valuable source of advice was their peers. “We need to work on helping peers find each other,” Boucher said.

PPRC’s Marjorie MartzEmerson may have dampened the conference’s mood with the content of her presentation, but her talk on “Cadmium in the Northwest” was riveting. MartzEmerson described how cadmium received a lot of focus from EPA in the 1970s, but those early studies suffered from major gaps in data and our knowledge of the metal’s health effects. A renewed interest in the metal suggests toxicity at even low levels of exposure. Oregon and Washington have listed cadmium, a carcinogen, as a high priority toxin. But Northwesterners, and Americans in general, are still exposed to cadmium at levels that allow the metal to accumulate in our bodies and cause many potentially negative health effects. For the general population, the worst exposures come from smoking and food. As a naturally occurring element, cadmium finds its way organically into our vegetables and shellfish, but additional exposure occurs through fertilizers produced from phosphate rock, exposure to cigarette smoke and combusted fossil fuels.

The worst news of the day: Oysters are good at sequestering cadmium. Oysters from Northwest waters where volcanic soils contain more cadmium may not be as good for you as you think. But the news wasn’t all bad. There are solutions. MartzEmerson suggested we can reduce our exposure to cadmium by changing the kinds of fertilizers we apply and how we process them. We could also grow crops to uptake and remove cadmium before growing other crops. 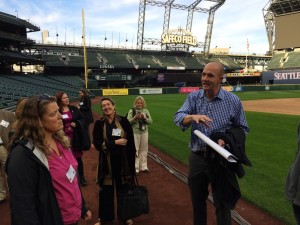 The Safeco Field Sustainability Tour was a big hit among conference attendees. Ryan van Maarth, Director of Engineering and Maintenance, provided a behind-the-scenes peek at the ballpark’s operations. Attendees got a personal on-the-field light show of the new LED lighting system, which has not only proven incredibly cost-saving for the club but hugely popular among players and fans alike. As proof, van Maarth said, Yankee Stadium just ordered the same set up. The tour also dove into the nitty gritty details of stadium waste disposal, power-washing, and retractable roof maintenance.

The first day of the Roundtable ended on a celebratory note. The Washington Department of Ecology and the Northwest Green Chemistry Center hosted the Safer Chemistry Champion Awards, which awarded state businesses for innovative leadership in green chemistry. Tidal Vision, an apparel company that aims to “upcycle ocean byproducts,” was awarded for their innovative alternative to nanosilver as an antimicrobial in clothing. Tidal Vision developed a safer method for extracting chitin, which is 100% non-toxic and biodegradable, from processed crustacean cells. Other winners were:

Check out full details of the awards and winners on Ecology’s website.

*The second installment of the Roundtable Review will be published on Monday, November 16