A 25th Anniversary Retrospective of the Pollution Prevention Act 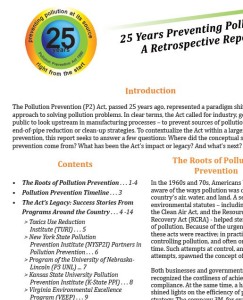 Twenty-five years ago, Congress passed the Pollution Prevention (P2) Act. What prompted the Act? What is the Act’s impact and legacy? And what’s next for pollution prevention?

*Each year, the third week of September is P2 Week. P2 week highlights the efforts of EPA, its state partners, industry, and the public in preventing pollution right from the start.