When Pacific Northwesterners hear the name MetLife Stadium we tend to remember a certain lopsided game of football that happened this past February. Why else should we care, right? Go Seahawks! 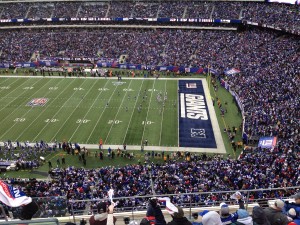 Well, MetLife Stadium has quietly achieved environmental gains that are arguably as impressive as the Seahawk’s Super Bowl win. In partnership with the Environmental Protection Agency (EPA) since 2009, Metlife has reduced its energy, water, and solid waste production across all operations. Over four years, the stadium reduced its total carbon footprint by 238,325 metric ton equivalents of carbon dioxide.

So what? According to the EPA’s Greenhouse Gas Equivalencies (GHG) Calculator, the above tons of carbon are equivalent to the annual emissions of 50,174 vehicles or – to use a currency relevant to the Northwest right now – the carbon dioxide emissions from burning 1,278 railcars’ worth of coal. Even more impressive, the stadium’s pollution reductions translate to a total savings of $22.4 million in operating expenses. (That’s the equivalent of abou 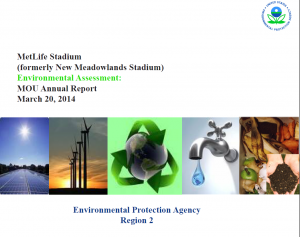 How did stadium managers do it? They curbed carbon primarily through green procurement practices. Construction used recycled metals and concrete instead of using newly produced materials. The stadium’s cost savings came from a host of green practices, from mass transit improvements to energy efficiency improvements to tighter recycling practices. In 2013, for example, MetLife implemented a new stadium-wide recycling program that helped divert 50.38% of its total waste stream.

The stadium remains a long way from matching Century Link’s waste diversion rate of over 90 percent, but MetLife’s gains in such a short time span bode well for future improvements. To see more details about MetLife Stadium’s pollution reductions, check out the full environmental assessment report.