RAPID RESPONSE QUESTION: Does Ultraviolet-C (UVC) cleaning for artificial turf effectively eliminate MRSA risks? Who is using UVC for turf cleaning? And, is it effective? 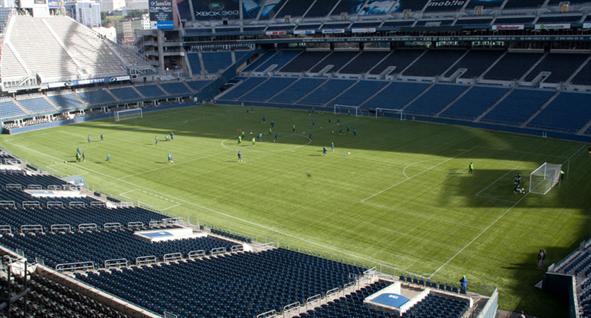 Methicillin-resistant Staphylococcus Aureus (MRSA) is a type of staph bacteria that is resistant to certain antibiotics called beta-lactams. MRSA resists methicillin and other common antiobiotics such as oxacillin, penicillin, and amoxicillin. Most MRSA infections are skin infections (Centers for Disease Control).

Artificial turf, an increasingly common surface in urban and suburban spaces due to its low maintenance and water requirements, presents risks of causing MRSA infections. Turf fields, which both absorb bodily fluids and cause cuts and abrasions, can create environments where bacteria thrive. Studies, however, have not definitively shown that artificial turf harbors more risk of infection than natural grass. We do know that sports requiring more contact or time on the ground are more likely to cause staph infections than other sports. Wrestling, football, and rugby see the highest rates of infections, according to the CDC.

To limit the risk of infection, turf fields require proper cleaning maintenance. Also, athletic gear, especially if worn on the turf field, should be properly disinfected after use. Other preventive practices include (CDC, University of Rochester):

Background of UV treatment of bacteria on synthetic turf

Different turf cleaning options and products exist, including ultraviolet (UV) treatment, liquid chemicals (including enzymatic cleaners) and ozone treatment. Ultraviolet (UV) light is considered an effective method to eliminate harmful bacteria from food, water, air, and various surfaces. UVC treatment employs the C-band, a shorter wavelength of UV light that kills germs. UV treatment may also be referred to as Ultraviolet Germicidal Irradiation (UVGI). UVC ruptures the nucleic acids of micro-organisms, rendering bacteria inactive or harmless. The degree of the method’s success depends on variables such as: application time on the surface; beam strength and use over time[1]; positioning relative to the treated surface; and others. Light strength can diminish over time, so it is important that bulbs are changed per manufacturer’s instruction.

Studies suggest that the MRSA found on different surfaces – such as Kentucky bluegrass samples, low density polyethylene films, and human and animal skin – is inhibited or destroyed by relatively short exposure to UV light (Hardjawinta et al, 2005; Silva et al, 2003, Thai et al, 2002). Studies on non-turf surfaces, and on wounds infected with MRSA, have also shown that UV light can destroy this bacteria. Only two studies conducted on synthetic turf were found in the literature. These are summarized below.

As an additional plus for UVC cleaning of synthetic turf fields, the process releases no harmful toxins onto the field or to surrounding areas. Some liquid turf cleaners, in contrast, are toxic, and may pose risks to the health of workers, children, and surrounding ecosystems.

While this document is intended to cover UV treatment, there are a few additional links to different treatments in “Other Notes” below.

Only two studies were found on the effectiveness of UV treatments on artificial turf. These studies suggest that UV treatments are at least as effective in eliminating bacteria, if not more, than other turf cleaning methods. Both studies on UVC light tested on synthetic turf have come out of Penn State.

Though not peer reviewed, these internal studies hint at the effectiveness of UV irradiation in eliminating turf bacteria. A 2008 study tested the survival of S. aureus under different chemical treatments on both indoor and outdoor turf. Though the study didn’t test UVC treatment specifically, it concluded that UV light exposure (or sunlight) and high temperatures played significant roles in eliminating the bacteria from all the outdoor turf tests. A more recent study by Penn State’s Center for Sports Surface Research evaluated the efficacy of a UVC generating device in eliminating S, aureus on synthetic turf surfaces. The study was designed to replicate UVC cleaning devices on the market, specifically the GreenZapr from GreensGroomer Worldwide. UVC treated plots completely eliminated the bacteria on both samples of the turf fibers and on the rubber infill balls commonly applied to turf surfaces (McNitt and Petrunak, year unkown).

One company dedicated to UVC cleaning, GreensGroomer Worldwide, says that its products, the GreenZaprTM and MiniZaprTM, “destroy the DNA of bacteria or viruses such as MRSA, Staph, C. diff, Hepatitis, E-Coli, Influenza and others that can live for days on synthetic turf.”

Those unaccustomed to using UVC technology may struggle at first to believe the processes’ effectiveness because it lacks much physical show. “People are used to seeing someone spraying and in their mind this is how it is done,” the representative of SportsturfNW said. “UVC is an old technology being adapted to today’s environment.”

Other disinfection options may include antimicrobial chemicals, ozone, or enzymatic cleaning. A few examples are listed and linked below. No studies were found comparing bacteria elimination efficacy or environmental or occupational safety of these options to UVC.

Ozone treatment is mentioned as a disinfection option for this application, but no commercial technology appears to be available for use on artificial turf.

[1] “Germicidal UV lamps are good for approximately 10,000 hours of continuous use. Generally, lamps should be replaced at least once a year. Remember, the lamp will continue to stay lit for many years. However, the UV effectiveness needed to kill organisms diminishes after about 10,000 hours. You should not wait until the lamp goes out to replace it, as you would with a regular light bulb.”  (UVtronics Frequently Asked Questions webpage)