P2 Really Does Pay: Pollution Prevention in the Real World 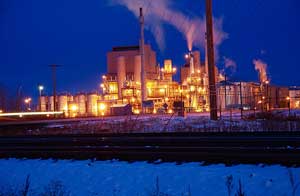 In the course of our careers, we all collect stories. Here’s one of my P2 favorites.

Years ago, I asked a number of chemical companies to open their facilities to me so I could learn where P2 was occurring. I was pleasantly surprised at the number of companies who invited me in.

One facility, a urea-formaldehyde resin manufacturer, discovered P2 during a crisis. The company had discharged its wastewater to the local sewage plant. But a permit renewal suddenly restricted discharges to just a few parts per million of formaldehyde. The plant was stuck! There was no room for an on-site treatment facility, and it was too expensive to truck the wastes off-site. The company considered shuttering the aging facility.

The plant manager found a novel solution: a plant walk-through!

“For the first time,” he told me, “I went through our processes, step by step, to see where wastes were coming from.” His workers to did the same, and found dozens of instances of avoidable wastes. A disconnected hose, for example, was left to leak into a floor drain. “Not a lot in terms of lost material,” he noted, “but enough to contaminate a few million gallons of wastewater.”

The largest single source of waste was the backwash used to clean a product filter, a step that produced a wastestream with high concentrations of chemicals. The product caught in the filter was just a bit “lumpy” according to the plant manager. They had been rinsing the filter this way for a generation, without ever considering alternatives.

The workers devised a simple procedure to break up the lumps and reroute the backwash into the process, avoiding the generation of a huge quantity of formaldehyde-contaminated wastewater. The procedure also improved the overall economics of the resin production.

With a few more clever tweaks, the plant achieved its new discharge limits.

There were a few valuable take-aways from this story:

David Sarokin is a P2 specialist at EPA and the author of Cutting Chemical Wastes, one of the first major studies to focus on pollution prevention in the chemical industry.

This article was originally published on the EPA’s Greenversations blog.

Comments Off on P2 Really Does Pay: Pollution Prevention in the Real World